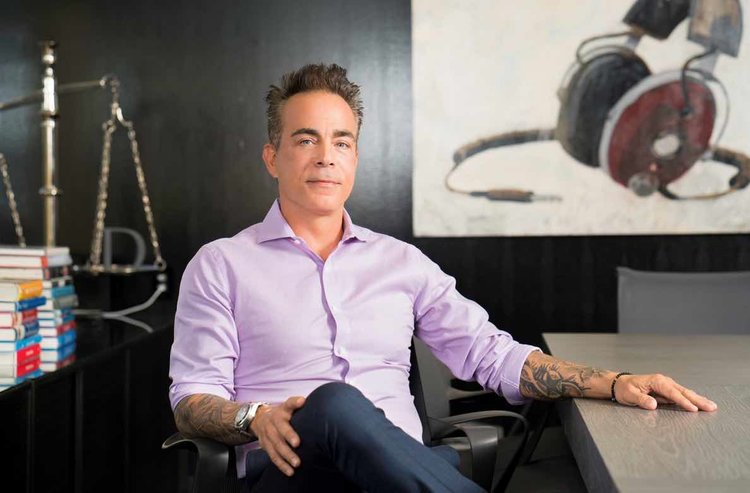 From his earliest days as a lawyer, Arash Homampour has thought big.

“My phrase was always like, ‘I’m Kobe Bryant, and you just don’t know it. Give me the ball and watch and see what happens,’” Homampour said.

Just in case you don’t get the point, he adds: “The ball would be a metaphor for a larger case.”

“The way we’re set up, it’s the most efficient use of our time and we make the biggest impact,” Homampour said. “We’re not a volume practice. We only handle a limited number of cases at one time.”

The firm, comprised of Homampour and six associates, pursues every case with the expectation it will go to trial.

“I’ve sat both behind and next to Arash in trial. One thing about his demeanor is that he’s relaxed, clearly in his element, but with razor sharp focus,” said the firm’s managing attorney, Farzad Yassini.

Nearly all of the firm’s cases come from other attorneys who “realize they are not experienced enough or they do not have the financial ability, or both, to litigate the case,” Homampour said.

“It’s like, if you’re a heart surgeon and you’re doing heart surgery and you’ve got this one specific type of heart surgery that only like five doctors can do … you go to [one of those specialists]. That’s how we are,” he said.

Homampour said he counts himself among a tiny cadre of elite trial lawyers that other lawyers turn to for help with big cases. This tiny group has the talent, the experience and the financial resources to get the best possible result, he said.

“Attorneys know that there are basically five of us. It’s like Nick Rowley, Arash Homampour, Brian Panish, Gary Dordick and Mike Alder,” he said.

“There are some others,” he added. “I’m not denigrating anyone else.”

In 2015, Homampour obtained a $60 million jury verdict on behalf of the survivors of Amy Shinedling, who was killed in a house fire started when a Sunbeam space heater’s auto shut-off mechanism failed to trigger.

“The family had left clothing within three feet of the heater, and that clothing started the fire, which ultimately killed the mom,” Homampour said.

Homampour said Sunbeam put a “safety device that only works in non-radiant heaters, in a radiant heater, and then marketed it [as having] an auto-safety shut-off on the box and in the manual.”

Homampour said he so thoroughly researched the issue that by the time the case went to trial, he knew the hazards and safety problems involved with Sunbeams’s heaters better than its top safety engineer.

“I got the national safety engineer to admit that they knew the safety device may not work, and that the consumer does not know that. And I got the actual product engineer responsible for the product to admit the consumer has an expectation that this heater would turn off in a fire,” he said. Shinedling v. Sunbeam Products, Inc., 12-CV438 (C.D. Cal., filed March 27, 2012).

“That’s a perfect example of what we do,” said Homampour, whose favorite aspects of being in trial are “extracting the truth” and “passionate domination of the courtroom.”

“It’s a subtle one, sometimes people don’t even see it or feel it, but I feel like I’m in control. In a good way. I’m making a difference. Basically massaging facts and witnesses and documents and all that stuff, towards an end, just result,” he said.

Appellate attorney Jeffrey I. Ehrlich handled three appeals for Homampour last year and describes the attorney as “one of the few trial lawyers who often does his own appellate work, and enjoys it.”

“I don’t know that I’ve ever seen another trial lawyer that is as emotionally invested in each case that he tries,” he said.

Homampour is able to see the big picture of how a case fits together in a way that very few lawyers can do, Ehrlich said.

“Everything he did indicated that he had a strategy that he thought out and for each move. It wasn’t that particular move he was making, but he saw it five moves ahead and saw how everything connected,” Ehrlich said.

Homampour got his start doing personal injury work for a lawyer he clerked for while attending Southwestern Law School.

“He retired and gave me about 30 very small personal injury cases involving dog bites or slip and falls. … And, I found that I liked helping people, I liked making a difference, even on a small scale,” Homampour said.

But he was eager to move to bigger cases.

According to mediator and attorney Jeffrey L. Krivis, Homampour has got the “wherewithal to try any case that’s out there, but he’ll do the right thing for his client.”

In another case, Homampour represented Carlos Madrigal, a motorcyclist who was struck by an Allstate Insurance Co.-insured driver and rendered paraplegic.

“By Allstate refusing to pay the $100,000, that opened up the policy of bad faith,” Homampour said, “our position was that, Allstate is now liable for whatever the verdict is.”

Allstate had the street shut down and hired stuntmen and cameramen to reenact the crash — arguing the accident was Madrigal’s fault.

Homampour used the reenactment to his advantage.

“They made this $500,000 graphic that turned out to help my case because it showed that, if the guy had looked in his right hand mirror, or his rearview mirror, he would have seen Madrigal the entire time, up until the time he turned and ran him over and turned him into a paraplegic,” he said. Madrigal v. Allstate Insurance Co., 14-CV04242 (C.D. Cal., led June 2, 2014).

“In every case we have that ‘a-ha moment’ where I take something they did, turn it around and show that, not only are they trying to deceive the jury, but the truth still is there and we’re ex- tracting it,” Homampour said.

Scott E. Boyer, an associate at the firm, said, “The great thing about the firm and working for Arash, is that there is truly a team effort to obtain the best results for our clients who have been injured and wronged.”

Personal injury attorney Gary A. Dordick describes Homampour as, “the most interesting man alive, or at least in the legal community.”

“Just like [that] commercial,” Dordick said, adding that, besides being one of the top trial lawyers in town, Homampour is a well-respected DJ.

Homampour said he believes it is critical to have a life balance.

“I could DJ earlier times, the thing is, I’m so detail oriented that I’m not going to do a set for a different crowd at 10 p.m. unless I’m like 100 percent prepared, because I have to do it perfectly,” he said, adding that it’s hard to find the time to prepare “in the context of somebody who has a very busy trial calendar.”

Tech house is his favorite subgenre, but he plays generic electronic dance music “because a lot of people need to have vocals,” and occasionally rap “because it’s LA and people like rap.”

A good trial lawyer has the ability to get to the heart of the matter and connect with people through storytelling, Homampour said.

“I don’t think my talent in that area is limited to trials,” said Homampour, who is writing a screenplay.

“I’ve seen so many interesting things occur in life that the screenplay is just an expression of me and trying to tell a compelling story that is interesting and fun and makes people think,” he said. “I want to try my hand in writing a story that is compelling for people.”

The same way he is compelling in trial.

“This is it. Trial law. I found the perfect, perfect career and I’m just ecstatic that I found this,” said Homampour, who even has a tattoo on his forearm that reads: “Trial Warrior.”