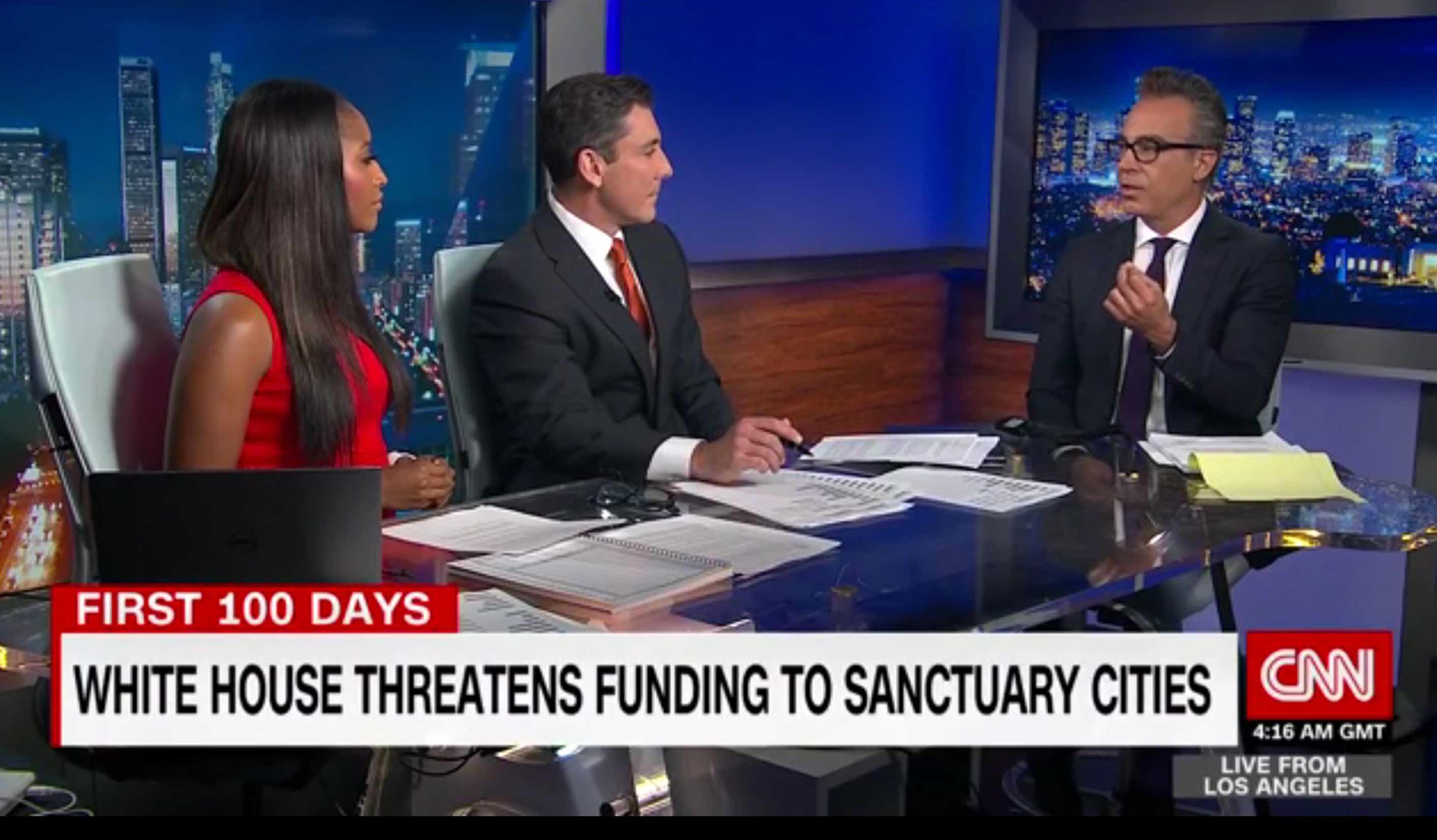 Male News Reporter: Well the White House is warning it will block federal funding to so-called sanctuary cities. They are towns and cities which protect immigrants and limit cooperation with immigration officials. On Monday, U.S. Attorney General Jeff Sessions threatened to withhold federal funding to the cities which actually violate federal laws.
Female News Reporter: Well there are about three hundred sanctuary cities and counties in the U.S. including New York, San Francisco and right here in Los Angeles. It is not clear which cities will be targeted. But several leaders say they will stand firm against threats from the Trump Administration.
Male News Reporter: Well joining us here now in Los Angeles, trial attorney Arash Homampour for more on, you know, the legal implications of what we are looking at here.
Arash: Hello
Male News Reporter: Nice of you to come in.
Arash: Absolutely.
Male News Reporter: And squeezing in to our temporary accommodations here. Ok, let’s get to, you know, the legalities here. One of the biggest problems here for the Trump Administration is it just simply a matter of that there is no legal definition out there of what a sanctuary city actually is?
Arash: Well, they defined it is as any city or entity that willfully refuses to comply with Federal Immigration laws and that really is just simply too vague for cities and states to understand when are they going to lose valuable federal funding. The city of San Francisco filed a lawsuit challenging the constitutionality of this Executive Order, and as an attorney, whether Republican or Democrat, its not even a close call. That Executive Order is unconstitutional on so many levels and we’re not dealing with just legalities. The city of San Francisco pointed out that if they lose federal funding under this Executive Order, 10% of their budget, budget monies that they spend now and get reimbursement later, there will be catastrophic consequences to those most in need – elderly, in-firmed will lose Meals On Wheels, will lose funding for housing, they will have to lay off police officers, they will lose funding for roads, they will have to lay off thousands of jobs.
Male News Reporter: I believe that 1.2 billion dollars is, I think, the grand total.
Arash: Correct
Female News Reporter: So, there seems to be a lack of clarity here in the process. I mean where do we stand in understanding what would trigger the government going ahead to deny or strip a city of money?
Arash: That’s the problem, is that the city of San Francisco has pointed out, they have no real notice as to what the consequences are. Are they going to lose all funding? Are they going to lose a little bit of funding? What is a violation? Is this selective? And so they are asking the court to enjoin this Executive Order because it is unconstitutionally vague. It just really doesn’t give cities and municipalities notice of what they are supposed to do.
Male News Reporter: You mentioned San Francisco, it was the first city to begin legal action against this move by the federal government, arguing that this order is not constitutional. We heard from the mayor, Ed Lee today, he tweeted out, “San Francisco knows that sanctuary cities are safer, more productive, healthier places to live.” Uh, which is pretty much the opposite of what Donald Trump, you know, President Trump and Attorney General Sessions have been saying. So what’s the reality?
Arash: Well, again, the premise behind Sessions’ comments is that somehow the city or the state, local states are letting loose criminally violent illegal or undocumented aliens and that’s simply not the case. What the city is demonstrating is that if police stop, whether they’re undocumented or not, someone who’s engaged in a violent crime, they are going to detain that person and they’ll go through the justice system. All the city is saying is, under the Constitution, the federal government can’t turn its local law enforcement into arms of the federal government, when that local law enforcement has serious issues to deal with involving violent crimes, drugs, that aren’t related to whether someone’s documented or undocumented.
Female News Reporter: So in the meantime, while they haven’t automatically starting this clawing back or denying of funds, the government has started publishing a weekly report on detainers. This is hundreds of cases of immigrants released from custody where they haven’t cooperated with federal immigration authorities. What’s the impact of doing something like that?
Arash: Well, just putting out a small number of statistics doesn’t necessarily mean anything in the bigger context, you know, local agencies arrest thousands and thousands of people for violent crimes and drug activities and just saying, here are a number of people that weren’t pursued that are, you know, that are undocumented doesn’t prove the point that undocumented individuals are more prone to engage in violent crimes. There’s simply no statistics to support that. And when you look at the Executive Order, just like the other orders, the court’s going to have to look at whether there’s evidentiary support for this, and there simply isn’t.
Male News Reporter: Ok, it’s sounding like its heading in the direction of the travel ban.
Female News Reporter: Yes, the travel ban.
Arash: Yes.
Male News Reporter: Ok, well we’ll see what happens. Arash, thanks so much for coming in.
Female News Reporter: Thank you.
Arash: My pleasure.
Male News Reporter: Appreciate the analysis.