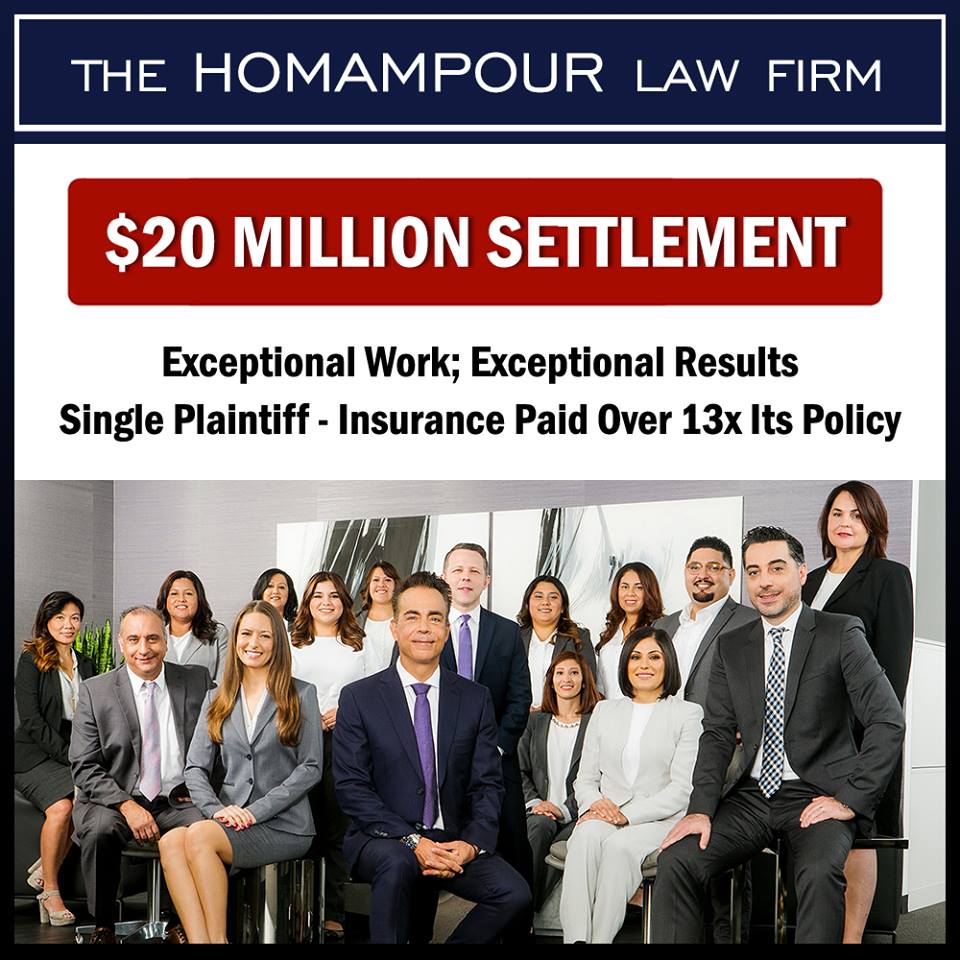 As many attorneys know, The Homampour Law Firm (HLF) is very selective in the cases it takes. We say “no” more than we say “yes” so that when the right case comes along we are ready to go. We are also one of the few firms in the state that have actually litigated and taken to trial what are called “bad faith” cases (or cases where an insurance company refuses to pay a policy limits demand and the injured party Plaintiff is attempting make the insurance company pay the full value of the claim which can be substantially in excess of the policy limits.)

Recently, HLF was brought in to help an attorney representing a pedestrian hit by a car, with what appeared to be minor injuries, where the driver had $1.5 million in insurance coverage.

The 41-year-old Plaintiff from El Salvador was lawfully within a crosswalk when he was struck by Defendant’s car. There was no reported loss of consciousness but abrasions to the left side of his head. X-rays, CTs and MRIs were initially normal. A subsequent MRI showed a meniscal tear in his left knee. Plaintiff reported excruciating pain in his knee and Traumatic Brain Injury Symptoms. Months later, Plaintiff elected to have surgery to repair the tear. He was subsequently diagnosed with Complex Regional Pain Syndrome (CRPS). He underwent extensive treatment for CRPS, none of which was effective. HLF recognized that Plaintiff’s life time of damages (with a condition that effectively locked him into a prison of pain) was substantially more than $1.5 million.

Then, after being Associated in, HLF did what it does and reframed the entire case getting the defense experts to change their opinions and to basically become Plaintiff’s experts with them agreeing that:

We strategically planned, had patience, and executed on the plan to make the carrier pay top dollar. Defendant’s original offer was $500k. Throughout expert depositions, Defendant’s offer increased to the policy limit of $1.5 million and then again to $5 million. On the day before trial, the parties accepted the mediator’s proposal of $20 million.

Essential to this amazing result was the work of Attorney Danielle Lincors, who really knew how to deal with all the moving parts given her defense background.

The Homampour Law Firm seized this opportunity to get full justice for the client and capitalized on the insurance company’s unreasonableness and put the behemoth entity into a stranglehold forcing it to pay $20 million – and all with love. This is what we do.