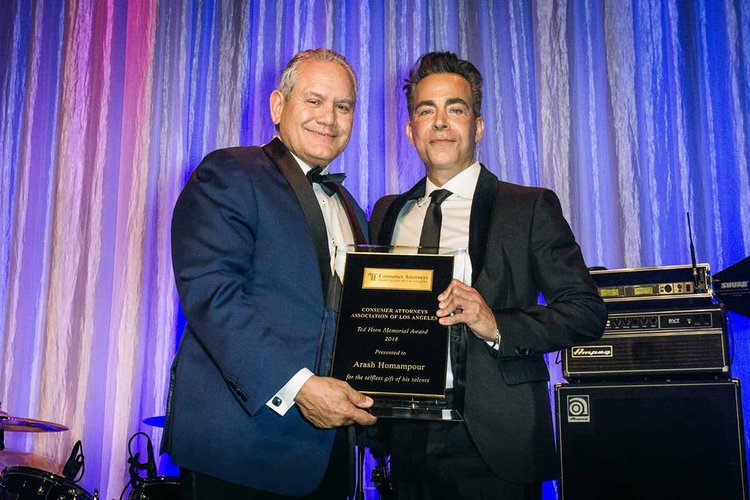 Arash Homampour is the recipient of the 2018 Ted Horn Memorial Award, presented to a CAALA member who has provided outstanding service to the Association and the legal community.

The Ted Horn award was created during the presidency of Stan Jacobs who wrote, “Ted Horn strongly believed in supporting his fellow plaintiff lawyers. He was unique in how he made himself available to help a lawyer, advising them on legal issues and responding to a lawyer who sought his input on a case.

Homampour received his B.S. degree from the University of Southern California and his J.D. from Southwestern University School of Law. He joined CAALA in 1995 and was elected to the Board of Governors in 2005. In 2009, he was named CAALA’s Trial Lawyer of the Year.

From its inception, Homampour has been instrumental in the development and protection of CAALA’s List Serve, co-writing the rules, posting thousands of messages and providing advice and counsel to countless CAALA members. He has also contributed hundreds of documents to CAALA’s document bank.

Here in Homampour’s own words is his philosophy about giving back:

“Early on I felt it was important to my success as a human being to give back, to not only take from all the great leaders that were sharing their knowledge, but to also share my unique perspectives, to make myself available to help other lawyers. I’ve always been someone who wanted to answer people’s questions. If I know the answer, it is my obligation top help my fellow trial lawyers and give them the best answer I could. I love helping people with no expectations of getting anything in return. I don’t do it to get something, I do it because it’s the right thing to do. If you get a great result for your client, nothing would make me happier.

Here’s Arash in a recent video talking about his commitment to CAALA:

If you’re interested in personal injury, you have to get involved in this organization called CAALA. And so, I was like many, you know, hiding out in the back of the audience, intimidated a little bit, by all the powerful people involved and all the leaders. And when I walked into my first CAALA event, I realized, you know, just how open and loving and how generous everybody is. And for me, it just was like home, being amongst other attorneys that had similar passions and similar goals and making a difference in protecting consumers from dangerous products and keeping the access to justice open. And when I you know, would go to CAALA seminars and meetings I’d be inspired by some of the speakers, but more importantly I would realize how much they were like me and how if they could do it I could do it. And so for me early on I felt it really was important to my success as a human being to give back, to not only take from all these great leaders that were sharing their knowledge, but to also share my unique perspectives. And so early on in CAALA I’ve been trying to teach, holding seminars. When I when I speak at lectures prepare for them, really give the audience their worth, and then make myself available to help other lawyers. So we have a listserv where thousands of lawyers every day can post questions about basic topics to extraordinarily complex, unique topics. And I’ve always been someone that I wanted to answer people’s questions if I knew the answer, because it was so troubling for me to think that someone’s gonna spend five days or six hours researching something and maybe not even get it right. If I know the answer it is my obligation to help my fellow trial lawyer and give them the answer as best as I could and help them. And so that’s been my motto. I also have a slight undiagnosed ADD disorder where I get easily distracted and I love, you know, turning away from a particular topic and looking on the listserv and seeing what issues are coming up. So it’s a win-win for the audience and it’s a win-win for me. But I love helping people and so many times I will answer questions that people post, give them examples, and really with no expectation of anything in return. People are always like, “Well can I refer you something?” and I’m like, “No, I don’t do it to get something.” I do it because it’s the right thing to do and because if you get a great result for your client nothing would make me happier.